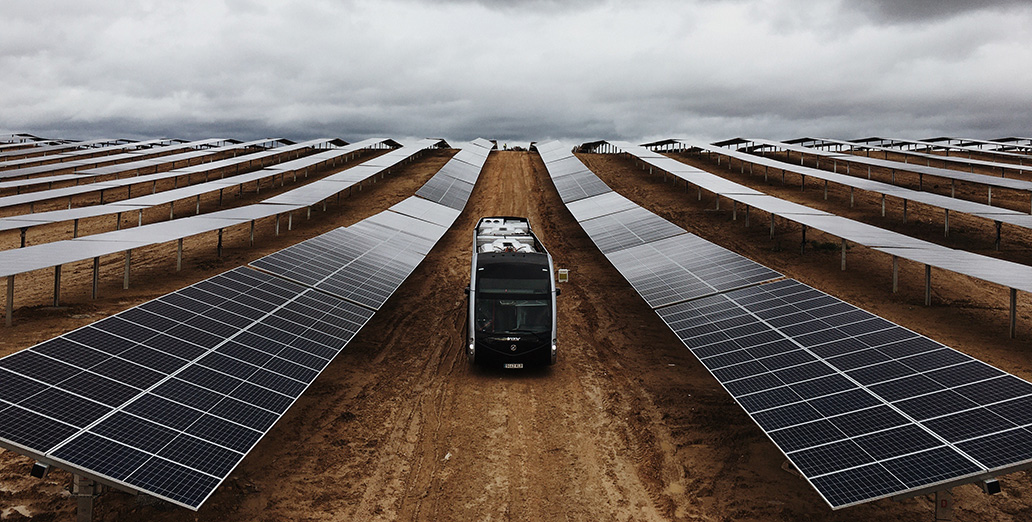 Irizar e-mobility has become the first green energy electromobility factory in Europe by opening and commissioning the largest photovoltaic solar farm in the Basque Country.

The park was opened this morning in the presence of Lehendakari (President of the Basque Government) Iñigo Urkullu and a delegation of the Basque Government, together with the Basque Energy Agency and the partners of the EKIAN solar farm, in which the Irizar Group is one of the largest investors with the acquisition of 3 MW. The energy generated in this farm will supply the Irizar e-mobility facilities, making it the first factory for the production of electric buses with zero emissions clean energy in Europe.

The Irizar Group is fully committed to the environment and, since it obtained ISO 14001 in 1998, has been actively taking steps in energy transformation.

The commitment to electromobility since 2011 is the clearest expression of its care for the environment and the well-being of citizens. The result of this commitment is the National Environment Award in the product-service category in Spain, which Irizar won in 2016.

Irizar e-mobility was inaugurated in 2018, the first factory in Europe for electromobility solutions, designed and manufactured based on eco-sustainability concepts with a type A energy efficiency certificate, the maximum available in Europe… It includes a warehouse and domestic water heating system that works by using the surplus steam from a company located in the adjoining plot.

The Irizar Group develops and manufactures its own batteries, under a partnership agreement signed with the Basque Energy Agency and Respol. It also offers a second life for its batteries, so that they can be reused at the end of their life-cycle in the buses, as storage components in recharging stations for electric vehicles in Repsol service stations, together with the power electronics associated with their use.

Also in 2019, after completing the Life Cycle Analysis (LCA), Irizar became the first European coach manufacturer with a certified EDP based on the international standard UNE-EN ISO 14025 by the International EPD System.

It is currently involved in a number of Circular Economy projects, in alternative energies, and in other major European projects, all to contribute to a sustainable mobility future.

The progressive reduction of CO2 emissions and other polluting substances, together with the introduction of environmental criteria, from the design of its products and promotion of respect for the environment of its staff and freelancers, are their most important premises.

EKIAN – The largest solar farm in the Basque Country

Ekian is a public private initiative promoted by the Basque Energy Agency and KREAN and has 22 investor companies.

The EKIAN photovoltaic solar farm is located on a 55-hectare industrial estate called “La lágrima” on the ARASUR Industrial Estate, in the municipality of Ribera Baja-Erribera Beitia, Araba.

It consists of 66,000 latest generation solar panels, 355 watts each, generating total installed capacity of 24 MW, thus doubling the current solar power of the Basque Country. At full capacity, it will produce approximately 40,000 MWh per year, i.e. electricity equivalent to the electrical consumption of 15,000 families in one year and will prevent the emission of about 14,600 tons of CO2 if that energy were produced by other fossil-based energy sources.

Wish you a happy Eid Al-Fitr

For the first time, Irizar has moved into the medium-distance public transport service in Cyprus by concluding an agreement for the delivery of 31 units of the Irizar i4 and Irizar i3 models in the region of Paralimni, Agia Napa and the surrounding areas. The contract signed with the operator OSEA, which after 10 years …